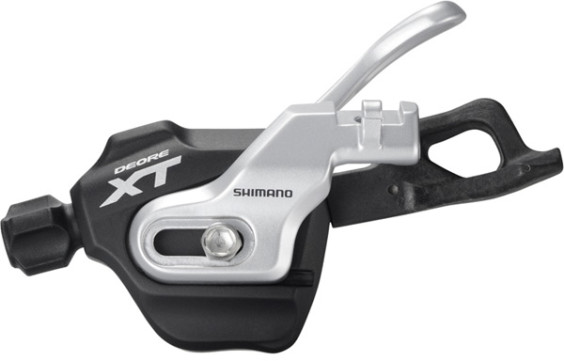 Dyna-Sys 10-speed shifters with Vivid indexing and Multi and 2-Way release to exceed the demands of ever changing bicycle designs and riding styles Light to the touch but positive and crisp, Vivid indexing provides a constant amount of shift lever force across all 10 sprockets 2-Way release: the upper lever still performs the same shift function, but it can now swing in either direction allowing it to be released by the thumb or index finger Multi Release allows multiple gear changes from both levers with one sweep, further adding to the speed of shift Multi-bearing design uses two ball bearing units to provide a low-friction and reliable shifting action One piece lower alloy thumb release lever increases durability and gives sharp precise shifts For use with Dyna-Sys 10-speed only Raised optical gear display instantly shows you what gear you're in and allows clearance for suspension lock out clamps below Multi-position adjustable handlebar clamp for custom lever positioning 2nd generation I-spec-B design is developed to attach directly to I-spec-B brake levers Average weight 255 grams

has been successfully added to your basket.

View View Basket to adjust quantities and to choose a delivery method, or Continue Shopping shopping. Once you are happy with your basket please proceed to the Checkout to complete your order.